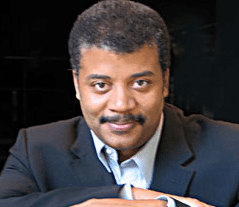 Neil deGrasse Tyson is an American astrophysicist, cosmologist, author, and science communicator. He is currently the Frederick P. Rose Director of the Hayden Planetarium at the Rose Center for Earth and Space and a research associate in the department of astrophysics at the American Museum of Natural History. From 2006 to 2011, he hosted the educational science television show NOVA ScienceNow on PBS and has been a frequent guest on The Daily Show, The Colbert Report, and Real Time with Bill Maher. Since 2009, he has hosted the weekly radio show Star Talk. In 2014, Tyson hosted Cosmos: A Spacetime Odyssey, a sequel to Carl Sagan’s Cosmos: A Personal Voyage (1980) television series.

In May 2009, Tyson launched a one-hour radio talk show called StarTalk, which he co-hosted with comedienne Lynne Koplitz. The show was syndicated on Sunday afternoons on KTLK AM in Los Angeles and WHFS in Washington DC. The show lasted for thirteen weeks, but was resurrected in December 2010 and then, co-hosted with comedians Chuck Nice and Leighann Lord instead of Koplitz. Guests range from colleagues in science to celebrities such as Gza, Wil Wheaton, Sarah Silverman, and Bill Maher. The show is available via the Internet through a live stream or in the form of a podcast.

Ladies Brunch On The Moon

Neil deGrasse Tyson and Fumi Abe join Negin to solve the mysteries of the universe, including whether or not aliens wear cargo pants and what a restaurant on the moon would look like. Neil also explains the “Wild West Frontier” of Space…

Neil deGrasse Tyson brings the universe down to Earth

Astrophysicist Neil deGrasse Tyson joins W. Kamau Bell and Hari Kondabolu to discuss the politics of space exploration, people's fear of artificial intelligence, and even tell some jokes. Tyson is Director of the Hayden Planetarium. In his latest book, “Astrophysics for People…

Neil deGrasse Tyson (the host of StarTalk) fell in love with the cosmos at age 9, on a visit to the Hayden Planetarium in New York City.  Not only did he fulfill his childhood ambition of becoming an astrophysicist, today he’s the director of…

Adam’s guest for this episode is the world’s best known astrophysicist--and an amazingly talented podcast host--Neil deGrasse Tyson. In this don’t-miss episode Neil discusses how hosting the StarTalk Radio podcast serves his mission to educate the public about science in a way…