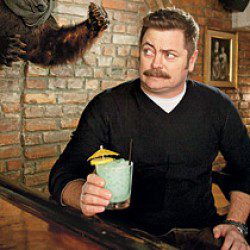 Nick Offerman has found his way into the hearts of many as the carnivorous libertarian Ron Swanson on Parks and Recreation. Nick started his career the way many have, in the Chicago improv scene. Prior to his work on Parks and Recreation Nick had a number of guest roles in television shows such as King of Queens, Will & Grace, Gilmore Girls, and Deadwood. He’s also a skilled woodworker, because apparently being an amazing actor and improviser isn’t enough.

Nick Offerman feels earnestly grateful about being Conan O’Brien’s friend.   Nick sits down with Conan once more to discuss processing feelings of intense jealousy, pitching his new book Where the Deer and the Antelope Play on its own merits, why creating things is…

Actor Nick Offerman talks with Andy Richter about learning practical skills from his farming family, why acting is just like a martial art, and tips on staying a healthy showbiz professional.

I think we have a new best friend and his name is Nick Offerman! The ex-con and star of Parks and Recreation makes his Comedy Bang Bang debut this week and gives all you Parks and Rec die-hards a glimpse into the tear-jerking…

Actor, and NOT just Ron Swanson from "Parks and Recreation"! "Sin City", "The Men who Stare At Goats", "All Good Things", and many more!

Inside the Bee Hive

Alright all you mindless drones, are you ready for another episode of Professor Blastoff? Nick Offerman has found his way to our secret lab and is here to discuss the structure of society. What choice do we have in the roles we…