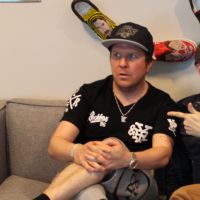 Nick Swardson can be found nearly any time of day on Comedy Central. Seriously. If they are airing movies, it is often Grandma’s Boy, Reno 911 Miami, or Blades of Glory. If they are playing stand-up, you might catch one of his two Comedy Central Presents or his special Seriously, Who Farted? You can catch him on Reno 911, or in his very own series Nick Swardson’s Pretend Time. You should also find his Gay Robot pilot online. It’s great.

Coming straight out of LA Podfest, the Sklarbros are joined by comedian and overall good buddy Nick Swardson for a live episode of the Country. We hear about the Sklar’s recent show in Mobile and tales of New Orleans debauchery before getting into stories with Daniel Van Kirk. Daniel tells of a father who accidentally ate three too many pot brownies and a husband who received an unfortunate surgery while his wife gave birth next door. Finally, a slew of celebrity guests including Ozzie Guillen, Ken Kratz, Christoph Waltz, and Mark Wahlberg drop in to share their take on the World Series, favorite NBA players, and more.

This episode is sponsored by DecodeDC and RosterBot.

Celebrate Mem Day with Nick Swardson as he tells us all about what it’s like touring in the same bus as Alice Cooper, the groundbreaking topics he covers in his new stand-up special “Taste It,” and life on the West side of LA. Then, Bernie Sanders, junior U.S. Senator from Vermont, stops by to talk about economic justice and the changes that will occur in America if he were elected to be President. Later, personal productivity expert Jacob Cloudy arrives to offer everyone tips on how to maximize their day to day activities. Plus, Bernie shows off his filibuster skills as Would You Rather returns!

One of the funniest people in the universe, Nick Swardson returns to the calming shores of Sklarbro Country! Nick tells us about developing an office video game comedy with Danny McBride, shares some of his vitriolic Vikings tweets, talks about the time he thought his car was stolen, and explains why he took 2 years off of doing stand up. Then, before a round of Quick Hits, Nick recalls how he was accosted for eating Chinese food in Evansville. Finally, in honor of Movember, we call up the mustachioed Sam Elliott who gives us his perspective on Thanksgiving. Don’t forget to get your tickets for the Sklar Bros one-hour special tapings at the Majestic Theatre in Madison, WI. Give the gift of Sklarbro Country pint glasses and a brand new Sklarbro County shirt to that special someone now available in the Earwolf store just in time for the holidays!

How many ingredients are in pizza? Can you high five an orangutan? What does the moon do when we’re not looking? The answers to these questions and more can be found in today’s Comedy Bang Bang! Nick Swardson finally found his way back to the studio and is joined by two first time guests: Comedian Brody Stevens and Nic Cage stand-in (and brother) Bob Cage. They guess the misheard lyrics, get on their soap boxes, and ponder “Would You Rather?” their way into Comedy Bang Bang history! And hey, you too can be part of Comedy Bang Bang history too if you pick up either of our new shirts from the Earwolf Store!

Is there a brand new episode of Sklarbro Country? I don’t know! Are Nick Swardson and Sam Elliott the guests? Must be, because I’m laughing! Randy and Jason discuss the mysterious lives of NFL punters and the bizarre prank played on ESPN’s Elizabeth Moreau before Nick Swardson of Nick Swardson’s Pretend Time comes by. Nick and the guys wax nostalgic about when they first met, long before Nick was even an embryo. Nick talks a bit about his experiences with Kato Kaelin (totally positive) and Andrew Dice Clay (completely terrifying), as well as Allen Iverson’s weird career move. Sam Elliott is back by popular request and he brings that special kind of crazy you can expect from a 66 year old character actor. Let us know what you think of Jose Canseco’s Baseball Camp, and go get the free Earwolf App. Churn THAT, butter makers!

As a disclaimer, unlike most Sklarbro episodes, this week contains language that isn’t suitable for children or people offended by profanity.

What do Nick Swardson and Bill Cosby-Bukowski have in common? They are not only both guests on this episode, but they both have a sexual history with Betty White! Fortunately they take time away from doing inappropriate things with Ms. White to play a rather unconventional game of Would You Rather, judge a surprisingly positive round of Jukebox Jury, and answer the very first Ungame Question of the Week. The show gets a little personal when Mr. Cosby-Bukowski shares some of his Jelloems and Nick Swardson introduces us to his brother Gary. Don’t miss the upcoming Nick Swardson’s Pretend Time on Comedy Central, and while you’re here you might as well check out the Earwolf Store. This has been Bruce Vilanch: Thank you.