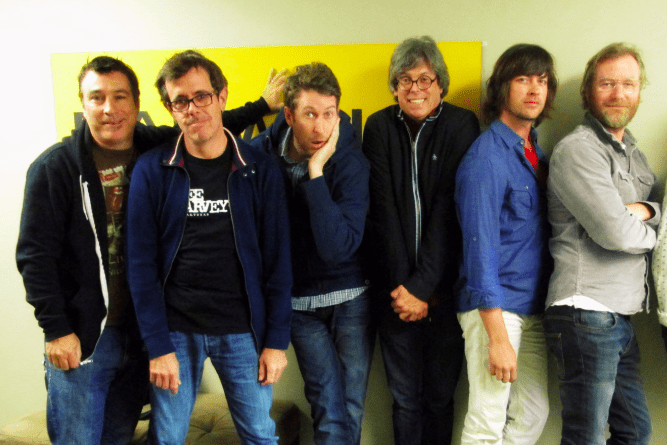 The Old 97’s are an alternative country band from Dallas, Texas. Formed in 1993,[1] they have since released nine studio albums, two full extended plays, shared split duty on another, and have one live album. Their most recent release is The Grand Theatre, Volume Two. They are recognized as pioneers of the alt-country movement during the mid to late 1990s along with bands such as Uncle Tupelo, Drive-By Truckers, Whiskeytown, The Jayhawks, and The Bottle Rockets.

It’s a special March Music edition of Comedy Bean Bag as Matt Berninger of The National & Rhett Miller of the Old 97’s get candid about being lead singers all while the Old 97’s play live versions of songs from their new album “Most Messed Up.” Later, entrepreneur George Zimmer appears in a cloud of cigar smoke and under the guise of a silhouette to tell us about being fired from Men’s Wearhouse. Then, fellow lead singer Russell Crowe of 30 Odd Foot of Grunts drops by to give us some behind the scenes info on his upcoming film Noah. You’re going to like what you hear in this episode. I guarantee it.

Check out The National’s rockin’ documentary Mistaken For Strangers in theaters & VOD on Friday, March 28th. Go to http://mistakenforstrangersmovie.com/ for more info!

GoToMeeting.com: Go to www.gotomeeting.com and use promo code BANGBANG for a free trial.

Hulu Plus: Go to www.huluplus.com/comedy for an extended free trial.

Harry’s: Go to www.harrys.com and use promo code BANGBANG for a free four pack of blades with your first purchase.

AMC’s Turn: Tune in for the premiere on Sunday April 6, 9/8c on AMC