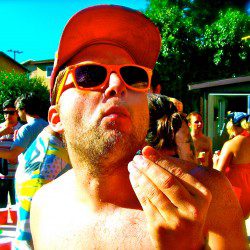 Paul Danke is a Los Angeles based comedian and a member of the Elite Earwolf Team of Bloggarific Blogsterz (name subject to change). This means that he’ll be giving us the low-down on hilarious comedy type goings-ons and whatnot. He’s blogged for FunnyorDie and is one of the masterminds behind the hip and hilarious monthly show The Comedy Garage. Give Paul a round of applause, but because he can’t hear applause over the internet (…yet…) go watch his videos and comment on his blogs and follow him on twitter and, I don’t know, get a tattoo in his honor or something!

Stand up comic, writer, and good friend Paul Danke joins Howard and the crew to celebrate the first anniversary of #Squatmelt! They’ll count down YouTube’s Top Trending Songs in the U.S. while reminiscing about the first Squat and debating the mystery that…

Kulap’s gone but safe so fear not Chartists because the incredible Paul Danke is subbing in. There’s serious dude energy as Howard talks about uniting sex performer and fan through his music, strangers giving him shoe and life advice and then not…