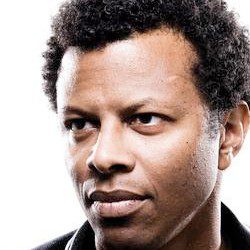 Phil LaMarr has a voice that is ingrained in the brains of many Americans. For over ten years he has voiced Hermes on Futurama and has leant his voice acting talents to projects such as King of the Hill, Adventures of Jimmy Neutron: Boy Genius, Harvey Birdman, Attorney at Law, and other nerd-approved shows with super long names. He recently played Cowboy Curtis in the Broadway production of The Pee-Wee Herman Show. He’s also been in everything else ever. Seriously, check out his IMDB.

And the Verdict Is…

After Tucker throws his team under the bus, The Supremes summon the rest of the crew to testify regarding their involvement in the various genocides they’ve committed. Featuring special guest Phil LaMarr.

Tucker and his band of misfits encounter a powerful intergalactic being known simply as "The Grand Judge." Will Tucker finally have to answer for his genocides? Featuring special guest Phil LaMarr.

Paul F. Tompkins welcomes everyone he loves back to Spontaneanation! This week, Paul’s special return guests and improvisers are Phil LaMarr, Daniele Gaither, and Gary Anthony Williams of The Black Version! They chat about what is their least favorite question strangers often ask…

Collected Stories Vol. 2: The Best of I Was There Too

Matt gathered some of the best anecdotes told on I Was There Too about experiences on the set of Aliens, The Big Lebowski, Poltergeist, and many more. You'll hear from Paul F. Tompkins, Aimee Mann, Gilbert Gottfried, Lisa Jakub, Phil LaMarr and…

Paul F. Tompkins welcomes all celebrating Independence Day to this week’s episode of Spontaneanation! This week, Paul’s special guest is actor and man of a million voices Phil LaMarr! They chat about the last item he donated to charity, the story behind…

“Oh man, I shot Marvin in the face.” These are the words John Travolta says after obliterating the face of this week’s guest, Phil LaMarr. Phil joins Matt to finally lay all the myths of Pulp Fiction to rest. Was Marvin originally…

Sarah and Susan present a uniquely sad episode as they talk about songs they heard before and after the artist passed away. Then, amazing actor and voice actor extraordinaire Phil LaMarr joins them to discuss “At the Ballet” from Chorus Line, why…

Folks, this is one for the books! We have FIVE guests this week from the worlds of comedy, film, television, athletics, and Toshiba. You'll get your weekly dose of Wahlberg before getting to know Graham Elwood who talks to us about performing…

Big Girl You Are Beautiful

It's time to get in shape for summer! What does that mean exactly? Well, it means Drew, Mitch, and Phil are ready to primp you to perfection! Feelin' a little chunky in that designer gown? We'll help you out! Do you have…