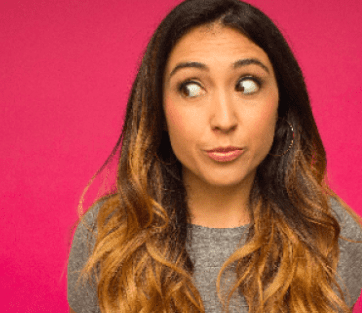 Raiza is an actor & comedian born and raised in the beautiful city of Miami, FL. Raiza received her Bachelors in Theatre Performance at Florida International University. She is the first fully bilingual Latina to be put on a Harold team named DiCaprio. You can catch her performing & hosting once a month at UCB with one of her all Latinx teams, SPANGLISH AQUI PRESENTS aka SAP. This is the only all LATINX only variety show at UCB Main Stage. She also performs with her all latinx team GERALDO & her Spanish speaking improv team IMPROVISOS PELIGROSOS! She is working on making her free throws because BALL IS LIFE & is the mother of two beautiful cats, Meow & Muggsy. Lets not forget that she also has a pretty sweet 3 point shot. Raiza would also like to mention that one time she was on MTV’s TRL and sat on Puff Daddy’s lap while he introduced the next video on the countdown, which happened to be, Enrique Iglesias, “Bailamos”

Andrew, special guest co-host Raiza Licea (Spanish Aqui Presents) and producer Matt chat about Trump boats sinking, Jessica Kurg and Mulan before getting to the voicemails about reading old racist comics to your kids and complicated living situations. Stay safe out there and call in if you have a racism question: 323-389-RACE.

Subscribe to Spanish Aqui Presents wherever you get your podcasts!

Comedian and actor Raiza Licea (Spanish Aqui Presents) joins Andrew and Tawny to discuss caller questions about a kid’s reference point for Black people being Space Jam, people’s obsession with tanning, and much more. As always, leave us a message about anything you think is racist at (323) 389-RACE.