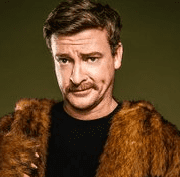 Rhys Darby is an actor and comedian from New Zealand, known for his energetic physical comedy routines, telling stories accompanied with mime and sound effects of things such as machinery and animals.

Darby is best known for playing Murray Hewitt, the band manager of Flight of the Conchords in the television series, a role he originally played in the BBC radio series under the name Brian Nesbit.[8]

Actor and comedian Rhys Darby (Flight of the Conchords, What We Do in the Shadows) joins Scott for a SFX showcase and to wonder if aliens exist. Alimony Tony shares his signature song parody process, and local grocer Albert Roe returns to protect…

Rhys Darby of The Flight of The Conchords enters the CBB 1st Timers Club! Rhys tests his movie trivia, plays a game of "Agree or Disagree?", and acknowledges his immortality. Then, Margie Donk returns to tell us about her new venture to…

Midler On the Roof