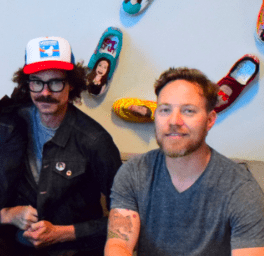 Rogue Wave is an indie rock band from Oakland, California, and headed by Zach Schwartz (a.k.a. Zach Rogue) who created the band after losing his job in the dot-com bust. Their first album was Out of the Shadow which was released privately in 2003 and re-released in 2004. In the fall of 2004 they went on a national tour of the United States. Their most recent album, Delusions of Grand Fur, was released on April 29, 2016, through Easy Sound Recording Company.

Oakland’s own indie rock band Rogue Wave and professional actor Haley Joel Osment join the 1st timers club on this week’s Comedy Bang! Bang! We’ll hear about Haley’s acting journey as well as live songs by Rogue Wave off of their new album “Delusions of Grand Fur.” (which is confirmed to be a play on the phrase “delusions of grandeur.”) Plus, Scott’s nephew Todd stops by having smoked a little too much of the reefer in celebration for the 420 episode and announces that he wants to become an actor.