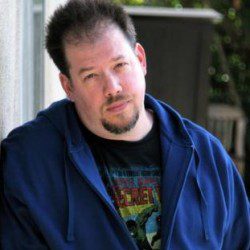 Sean Conroy is a vital member of the Los Angeles UCB Theatre, often performing in their flagship show Asssscat. He was actually featured as one of the improvisers in the Asssscat DVD which is available on Netflix. He’s been on just about every comedy television show you like: Upright Citizens Brigade, Cheap Seats: Without Ron Parker, Players, and Childrens Hospital just to name a few. Improv junkies know him as a founding member of The Swarm.

On this episode of Sonic Symbolism, Björk welcomes her dear friends Jennifer Tilly, Nicolas Cage, and Thorval the Ice Troll to revisit old memories and to discuss the tracks from her 1995 album Post.

Andy Daly and Sean Conroy join Matt Besser this week for scenes about peddling your vintage Star Wars cards, grabbing a bite at the Funko Pop store, a book report on novelizations, Jaws in France, and more!