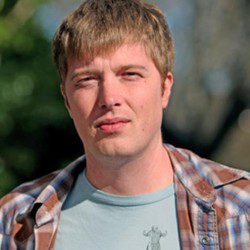 Originally from La Crosse, WI, Shane Mauss moved to Boston in 2004 (at the supple, tender age of 23) to pursue his childhood dream of becoming a standup comedian. In less than three years, Shane caught his big break when he was awarded Best Standup Comic at HBO’s US Comedy Arts Festival in 2007.

Shane’s TV credits include three appearances on Late Night with Conan O’Brien, an appearance on Jimmy Kimmel Live!, Comedy Central’s Live at Gotham, Showtime’s Comics Without Borders, Two appearances on BBC’s The World Stands Up, and in what is easily his strangest television appearance to date: Playboy TV’s Night Calls.

Stand-up comedian and host of the podcast Here We Are Shane Mauss joins Howard, Stard and Hugo to count down the latest charts! Shane shares his psychedelic expertise as they spotlight the top trending music videos on YouTube. Later, they debate theories…

Cam and Rhea talk "This Is Us," rich people and "The Little Mermaid." Sets from Michelle Biloon, Mohanad Elshieky, Mary Radzinski, Shane Mauss and Casey Ley. This episode is brought to you by Hearts Beat Loud film and Daily Burn (www.dailyburn.com/PYHT).

How Did You Start With Psychedelics? with Shane Mauss

Jonathan sits down with stand-up comedian Shane Mauss to talk about psychedelics, the pros and cons of edibles, and microdosing. And how was the first time Jonathan did shrooms? With Jonathan Van Ness and guest, Shane Mauss Shane Mauss: http://www.shanemauss.com Shane Mauss…

Why The Best Treatment for PTSD May Be An Illegal Drug

Psychedelics, maaaaan! Gateway to the inside of your miiiiiiiind! Enemy of the maaaaan, maaaaan! Also, a thing that's been around for so long in human history, we don't even have an accurate date for when our ancestors started doing them. They've just…

If I could turn back time, I would spend the time listening to Professor Blastoff! This week we discuss time travel with comedian Shane Mauss (listeners at home, we hope you are applauding after reading his name), who joins us for a…