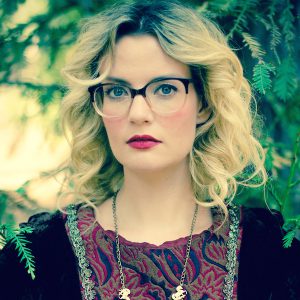 Siobhan Thompson moved from England to New York City to seek her fortune, but found comedy instead. She started taking classes at UCB in 2010. She is an actor/writer on the Maude team Alamo and was previously an actor on The Prom, and can be seen doing very stupid characters in many ridiculous comedy shows around town. She is a proud member of indie sketch group The Charlies, with whom she has performed at various festivals throughout the country. You may have seen her on your televisions saying words. Or maybe not. Maybe you don’t even own a television.

Siobhan Thompson (Dimension 20, Rick and Morty) returns to the show to discuss Coffee Talk with Nick and Heather! They talk about the proper English way to brew tea, the soothing sounds of the game, magical realism and more!

Siobhan Thompson (Dimension 20, Rick and Morty) joins Nick and Heather to discuss the animal advocacy game Kitten Squad! They talk about the bait and switch nature of cutesy graphics to horrific images, Nathan Drake's legitimacy as an archaeologist, and more!

How well do you read Latin? Because if you’re not all that good at reading Latin or other dead languages, good news: you could have still had a job as an 1800s historian. Fun example: there’s a story claiming the Roman emperor…

All The Insane News Donald Trump Stopped You From Noticing

The Grimm Life: Fairy Tales With a Modern Twist

TO HEAR MORE EPISODES OF THE GRIMM LIFE GO TO HOWL.FM AND USE PROMO CODE GRIMM AT CHECKOUT. Join the Sisters Grimm (Siobhan Thompson and Anna Rubanova) as they bring you stories on a familiar theme with a magical twist. Modeled after…