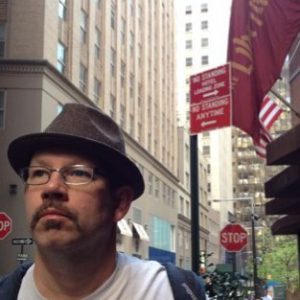 Ted Michaels is a former member of the performing company at the Groundlings Theater in Los Angeles where he was featured in their main stage shows. Other stage credits include One Word Improv with Eddie Izzard and the one man show Boy From Mars. In addition to many commercial appearances, his television credits include roles on The Comeback, Campus Ladies, According to Jim, Girlfriends and Mad TV.

Paul F. Tompkins welcomes people in the world and beings from outer space back to SPONTANEANATION! This week, Paul’s special guest is improviser and writer of the upcoming Ghostbusters Katie Dippold! They chat about what it would be like leading a cult,…

The Underwear Department at Macy's

Paul F. Tompkins welcomes you and yours, including families, back to Spontaneanation! This week Paul’s special guest is singer-songwriter Aimee Mann! They chat about the thing Aimee desires that she is most ashamed of desiring, accepting that other people have opinions of their…

Friends, we've been getting to know each other for thirteen weeks now. Can we finally be real with each other? No? Awesome. Instead, let's play pretend! Drew, Ted and Brian play pretend being boxcar hobos, astronauts, mommy and daddy (and therapist), and…