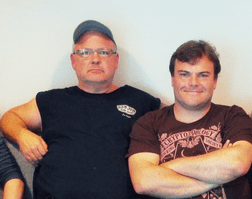 Tenacious D is an American comedy rock duo that was formed in Los Angeles, California, United States in 1994. Composed of lead vocalist and guitarist Jack Black and lead guitarist and vocalist Kyle Gass, the band has released three albums – Tenacious D, The Pick of Destiny and Rize of the Fenix. Tenacious D’s studio releases, and (as of 2006) its live performances, feature a full band lineup, including such musicians as guitarist John Konesky and bassist John Spiker. They are masters of their craft.

The masters of their craft, Jack Black and Kyle Gass of Tenacious D join the first timers club on this week’s Comedy Bing Bong! They talk about their life expectancy, hanging out in the Mr. Show days, and give us a ‘sclusy regarding the spooky themed 2nd Annual Festival Supreme. Then, returning champ Regina Crimp is back to tell us about branching out into singing covers of other theme songs besides America’s Funniest Home Videos and collabos with the D. Plus, Russ, CEO for ROSS Dress for Less drops by to share all the details about the new back to school sale at ROSS. That’s not all, The D perform some jingles for us live!