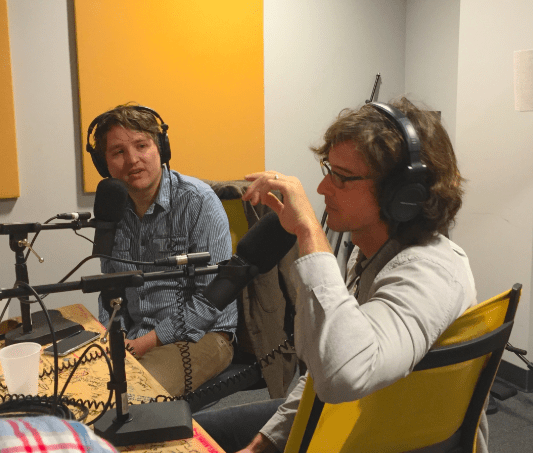 The Milk Carton Kids are an American indie folk duo from Eagle Rock, California, United States, consisting of singers and guitarists Kenneth Pattengale and Joey Ryan, who formed the group in early 2011. The Grammy-nominated, flat-picking harmony duo have since emerged as a powerful voice defining the continuing folk tradition whose virtuosity defines The Milk Carton Kids to the delight of both traditionalists and newcomers to the folk movement alike.

Enjoy volume 5 of improv4humans with Matt Besser’s best of music scenes, featuring music from Noah Gundersen, Colleen Green, Michael Dean Damron, St. Lenox, Ben Lee, Pedro The Lion, Sarah Shook, The Milk Carton Kids, Murder By Death, and Hop Along. Their music inspires scenes about inappropriate displays of grief, faking an adult epiphany, a homesick space colonist and much more. Be a good humon, and support these musicians by purchasing music off their websites.

360 — The Milk Carton Kids and the Adult Epiphany

Singer-songwriters Kenneth Pattengale and Joey Ryan aka The Milk Carton Kids return along with improvisers Mary Holland, Seth Morris, and Horatio Sanz for a special musical improv4humans! The Milk Carton Kids bring the whole band to play songs from their newest album “All the Things That I Did and All the Things That I Didn’t Do,” inspiring scenes about learning to love in a weird way, a man who is depressed because he’s been masturbating wrong his whole life, and a teen that desperately wants to have an adult epiphany. Plus, they test out creepy pickup lines and a father deals with his addiction to mustache rides.

Enjoy volume 2 of improv4humans with Matt Besser’s best of music scenes, which were voted on by the fans. This episode features music from Ryan Bingham, Allison Weiss, Murder by Death, Waxahatchee, The White Buffalo, The Milk Carton Kids, Dawes, Robbie Fulks, Frank Turner, Dave Hause and Dan Deacon. Their music inspires scenes about regional girlfriends, bottomless bathtubs, a traveling jug band and much more. Be a good humon, and support these musicians by purchasing music off their websites.

Singer-songwriters Kenneth Pattengale and Joey Ryan together are The Milk Carton Kids and this week they join Mary Holland, Matt Newell, and Seth Morris for another musical edition of improv4humans with Matt Besser! The Milk Carton Kids play us some select tracks off of their many albums that will inspire scenes about a new dog who learns how to fit in, heaven being much like life on Earth, and the incredible lengths a group of kids go to find out what kind of jean shorts a lady in their neighborhood is wearing. Make sure to get the Upright Citizens Brigade television show season 3 now available on DVD, the UCB Comedy Improv Manual, and pick up The Milk Carton Kids music at www.themilkcartonkids.com!