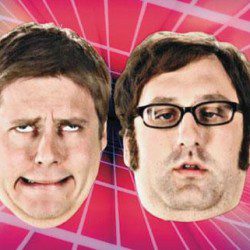 Tim Heidecker partnered up with Eric Wareheim in the hills of Pennsylvania to form the aptly named comedy duo Tim and Eric. They were later discovered by comedy guru Bob Odenkirk. They are known for an original blend of comedy and highly experimental video production. Perhaps you know them from the Adult Swim shows: Tom Goes To The Mayor, Tim and Eric’s Awesome Show Great Job!, and Check It Out! With Dr. Steve Brule. If you knew all this, then you’re well aware of their feature length film Tim and Eric’s Billion Dollar Movie. They’re both handsome.

This week’s Comedy Bang Bang was recorded live at the South by Southwest Festival 2013 in Austin, Texas with the stars of Jash! Michael Cera, Sarah Silverman, Tim & Eric, and Reggie Watts join Scott to talk about coming together to form…

Have you seen Tim & Eric's Billion Dollar Movie yet? We'll you'll be clamoring to see it after this in-depth interview with the titular Tim Heidecker and Eric Wareheim. They reveal all the deets about making a movie for "The Big S" and share…