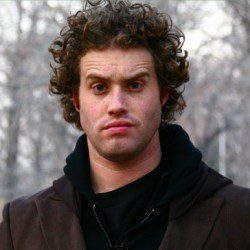 T.J. Miller knows more about giraffes than you do. He performed stand-up comedy in Chicago for years before making it out to Los Angeles to star in the underrated ABC sitcom Carpoolers. Since then his career has exploded: His film resume includes Get Him to the Greek, Yogi Bear, and Unstoppable and more. He’s also a filmmaker and his short films Successful Alcoholics and I’m Having a Difficult Time Killing My Parents have made waves at film festivals all over the country. His stand-up has been featured on Mash-Up, Chelsea Lately and TBS’s Conan.

Yanking your chain with T.J. Miller.

Sheer Will of Force and Salsa

Renaissance man T.J. Miller has been killing it on HBO's Silicon Valley and he's returned to the calming shores to give us a behind the scenes run down of the incredibly well written/casted & hilarious Mike Judge TV show. T.J. describes Mike…

There has been a lot of coastal talk on the show lately, so we thought we'd bring in T.J. Miller for some of his patented Denver energy! He'll teach you the art of faxing during our Billboard Heatseekers Chart and he even makes an…

Randy and Jason throw down some mad sledge this week on Sklarbro Country! T.J. Miller graces the calming shores primarily as a note-taker, but fortunately he finds time to tell us about his journey to Hollywood and to share one of his…