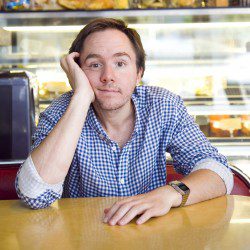 Tommy Dassalo is an Australian comedian/ writer/ actor/ your little buddy. He’s had guest roles on Australian shows Sleuth 101 and The Librarians, and written for Rove, Talkin’ ‘Bout Your Generation and TV Burp. As a stand-up he’s been nominated for the Best Newcomer award at the Melbourne International Comedy Festival, received glowing reviews for his festival seasons, and toured Australia extensively. He hosts The Little Dum Dum Club, a weekly comedy podcast out of Australia that has featured guests like Paul F. Tompkins, Marc Maron, “Weird Al” Yankovic and Matt Besser, and recently came runner-up in The Earwolf Challenge. I’ve heard of that!

We were once bitter rivals, and now...best friends? Perhaps it's too soon to tell, but we definitely adore Tommy Dassalo and Karl Chandler, two of our competitors in The Earwolf Challenge. They came to the U.S. for a brief trip and we…