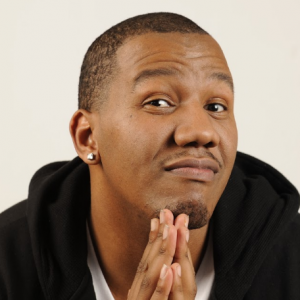 Travon Free is an Emmy winning writer from Compton California, formerly of The Daily Show With Jon Stewart and Trevor Noah. He is currently a writer for “Any Given Sunday With Bill Simmons” on HBO. Along with his (use to be) popular “FREEdom of Speech” socio-political comedy blog, his writing work can also be found all over the web (including TV One’s TheUrbanDaily.com) as one of the most sought after young comedic voices on social, political and pop culture issues (Feel free to vomit here).

He’s also been featured and seen on John Oliver’s New York Stand Up, Tosh.0, Chelsea Lately, The Stephanie Miller Show, the hit web series “The Gentlemen’s Rant”, the “Twitter Come Alive” national comedy tour and “The Daily Show Political-ish Stand Up Tour”. His debut comedy album “Undefeated” can be found on iTunes and you can occasionally catch him on various tour stops with international stand-up comedy giant Russell Peters and many other places where people tell jokes into microphones.

He currently lives in Los Angeles with no pets and over 200 pairs of shoes often referred to as his “children”.

Trump sought to trademark ‘tele-rally'. Tala Ashe, Travon Free, and Negin have plenty to say about it. They also explore misconceptions about people who receive stimulus checks and what white fragility means, historically.

Travon Free gets into virtual bed with Nick and Megan to discuss the keys to a happy relationship, the importance of representation in the media, and his memorable experience working in late night television.

Original release date: June 18, 2018. Comedian Travon Free sits down with Cameron to discuss separating masculinity from sexuality, getting to a point where you no longer have to keep coming out, and how his show will have the first with a…

Comedian Travon Free sits down with Cameron to discuss separating masculinity from sexuality, getting to a point where you no longer have to keep coming out, and how his show (Camping on HBO) will be the first with a queer black lead…

This Thanksgiving, Negin pushes politics to the side of her plate and welcomes a medley of guests to debate big questions about love and relationships. Should you stay friends with your ex? Why are there so many unmarried Americans? How do you…

John Fugelsang (Page Six TV, Tell Me Everything) and Travon Free (Full Frontal with Samantha Bee) join Negin to talk about why the Iran Deal and the Clean Power Plan make conservatives so mad. They also discuss Congress’s response to Trump scrapping…

New Emmy winner Travon Free (Full Frontal with Samantha Bee) opens up to Matt and Dave about the overwhelming experience of being bisexual, his break-up before Emmy night, plus meeting the "Stranger Things" kids! The guys also answer one of your advice…

Cash Me Outside with Travon Free

Comedy writer and fellow Earwolf podcaster Travon Free (The Room Where It’s Happening, Any Given Wednesday) joins Sarah and Susan to talk about coming up on the 10th anniversary of the last time he cried real hard, Doctor Who, School of Rock…

Writer, comedian, and podcaster Travon Free, co-host of the new Earwolf podcast "The Room Where It's Happening: A Hamilton Fan Podcast" joins Andrew to talk about current trends including an Italian gymnast joking that she "should paint her skin black to win,"…

Denzel Washington Is The Greatest Actor Of All Time Period #56December 2, 2015