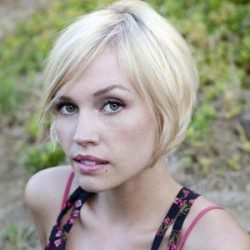 Whitney Moore is an actress who made her mark in the indie film scene with her first feature film Birdermic: Shock and Terror. Birdemic is one of the greatest bad movies ever made. Don’t be mistaken, It wasn’t Whitney who contributed to the poor quality of this film. Whitney’s performance helped made Birdemic one of the most unique films of it’s day, and gave the film it’s large cult following. It’s a tall order for an actress to work with a director such as James Nguyen. For that we salute you, Whitney Moore.

This week Paul, Jason, and June discuss the 2010 film, Birdemic: Shock and Terror! recorded live at the Largo theater in Los Angeles with special guests "Weird Al" Yankovic and Whitney Moore. The crew digs into all the bad CGI, un-needed B-Roll,…

Did you guys know that there is a crisis with our environment? If not, you must not have seen Birdemic: Shock and Terror, this week's victim for a very special How Did This Get Made? LIVE! Our friend "Weird Al" Yankovic is…