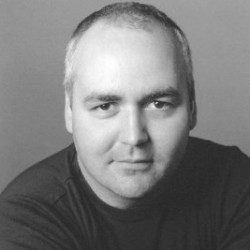 Will McLaughlin is a Meisner trained actor and began studying with the UCB in New York City in 2001 and moved to Los Angeles in 2006 to be part of the UCB’s new west coast theater. Best idea he’s ever had. Prior to becoming a professional actor and teacher he was a sous-chef, a window washer, a weekend DJ and an advertising copywriter. But the best job he’s ever had is being a teacher at the UCB Theater.

Will has a recurring role on Parks And Recreation as officer Randy Killnose. He can also be seen on the shows Happy Endings, Ben And Kate, Curb Your Enthusiasm, The League, Law And Order SVU and Third Watch. His films include Men In Black 3, Gigantic, and Terrorists where he shared his first on screen kiss with the UCB’s Ian Roberts. He mostly plays cops, but seriously, he’s versatile. He can also play security guards.

Pete Hulne and Will McLaughlin join Matt Besser for scenes about Springsteen’s latest lyrics, casually hiring a hitman, a fake bodega, the life of an elevator attendant, and more.

Best of The Bible

Jon Gabrus, Joe Wengert, and Will McLaughlin are surrounded by passwords everywhere they go on this week’s improv4humans with Matt Besser! They also explore how nuns feel really feel about Katy Perry, a teacher giving their students a gentle ribbing, and what…

Andy Daly, Dan Lippert, and Will McLaughlin get heated at an all you can eat restaurant, use the expert toothbrush services of a man named Toothbrush Tommy, and find out that teens are actually Oompa Loompas on this week's improv4humans with Matt…

The hot streak continues as Seth Morris, Mookie Blaiklock & Will McLaughlin join Matt Besser on this week's improv4humans! They’ll talk about weird things they've done with family pets, which scary movies freaked them out in their youth and debate the existence…

Sean Conroy, Eugene Cordero, and Will McLaughlin are back this week for a bonus episode of improv4humans! They explore the world of cougies and cougars. Enjoy!

Take a break from catfishing that special someone and listen to today’s improv4humans with Sean Conroy, Eugene Cordero, and Will McLaughlin! It’s better than getting a massage from a cat masseuse and you’ll learn a thing or two about defending yourself. Be…

We took to the Earwolf Forums and asked YOU which were the best scenes in the past episodes of improv4humans and had so many to choose from that we split them into two very special sampler episodes. Enjoy this pu-pu platter of…

Eric the Paid Intern is leaving Earwolf to take a job in facial recognition software (because he's a genius) so here are some awesome Eric interviews and improv scenes that we've saved up from past episodes. Hear improv from Horatio Sanz, Adam…

Wouldn't it be funny if you guys, I don't know, like, listened to today's episode of improv4humans or whatever? Our humans for the week are Amanda Sitko, Mookie Blaiklock, and Will McLaughlin who get a vocab lesson and get to know some…

Don't be such a baby! Listen to improv4humans featuring Brett Gelman, Will McLaughlin, and Eugene Cordero. It's more refreshing than a crisp, cool bottle of water and more thrilling than getting candy from Michael Jordan. Be sure to pick up an improv4humans…