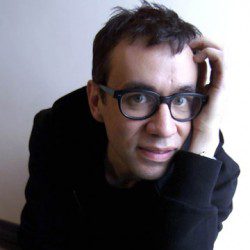 Fred Armisen has been a cast member of Saturday Night Live since 2002. He is well known for his impressions which include Barack Obama, Prince, Steve Jobs, and David Paterson, the Governor of New York. Before joining the comedy game Fred was a respected musician, playing drums for Trenchmouth and Blue Man Group. Recently his sketch duo Thunderant created the IFC sketch show Portlandia.

Samantha Bee sits down with actor, comedian, and drummer extraordinaire, Fred Armisen to discuss returning to live comedy shows, performing for an audience, why every house should have a drum set, the first concerts they ever went to and what it's like…

Comedian and actor Fred Armisen feels productive about being Conan O’Brien’s friend.   Fred sits down with Conan to talk about approaching life from a drummer’s mentality, being a tech wiz, and hating the beach. Later, Conan responds to an issue with…

Comedian and actor Fred Armisen (Saturday Night Live, Big Mouth, Portlandia, Los Espookys) stops by to talk with writers Mike Sweeney and Jessie Gaskell about his history with doing stand-up at Largo in Los Angeles, his first appearance on Late Night with Conan…

Madrid: Live from Outside Lands 2016

Paul F. Tompkins welcomes all back to Spontaneanation, recorded in front of a LIVE audience at Outside Lands in San Francisco! This week, Paul’s special guest is Fred Armisen of Portlandia and Saturday Night Live! They chat about whether a cheeseburger is…

If It Ain't Stiff, It Ain't Worth A Fred Armisen

Fred Armisen & Jake have been buds for a long time and are here to talk about all things Punk on today’s edition of THE FOGELNEST FILES! Fred tells us about filming interviews as different characters in his 1998 SXSW Guide to…

What would a 100th episode be without a Sklarbitration, topless golfing women, and old Greek man pillows? Fred Armisen, of Saturday Night Live and Portlandia, has been friends with Randy and Jason Sklar for over a decade, and the show is filled…