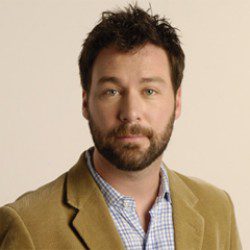 Jon Dore is a comedian who will soon have the same grasp on the U.S. as he does on his homeland of Canada. In Canada he was a correspondent for Canadian Idol, had a Comedy Now! special and even had his own show The Jon Dore Television Show. Since reaching the shores of America he has appeared on Conan, How I Met Your Mother, and his very own Comedy Central Presents. He’s not from around here, guys, so let’s all be extra nice and welcoming to him!

Comedian Jon Dore chats with guest host Samm Levine about their shared past, Canadian holidays, and Jon's new Comedy Central special, "Big Questions, Huge Answers". This episode is brought to you by The Athletic (www.theathletic.com/pollak).

Comedian and actor Jon Dore joins the Sklars for the final episode of Sklarbro County! They celebrate the end of an era by having Jon tell the tale of his poker-induced seizure before diving into Stories. Daniel Van Kirk opens with a…

Happy new year, blastronauts! David Huntsberger starts it off with a solo episode where he translates morse code and analyzes the popularity of Serial. Then, Canada's finest Jon Dore and Eddie Della Siepe join David to talk about Canadian and American generalizations, policing, insurance, religion,…

The Sklars start off the show with football players who murder animals and the controversy over Cardinal's Quarterback's who would like to spread the word of Jesus. Then, Randy and Jason welcome to the show Jon Dore, who helps explain what Mumps is…

The voice of Canada, Jon Dore returns to Sklarbro County and that can only mean one thing. BRANDON'S GOTTEN SO BIG! Jon joins the County boys to go through some of Daniel Van Kirk's amazingly crazy stories as well as talk to…

Howie and KuKu welcome the hilarious Jon Dore to the show for the very first time on this week's WHO CHARTED! Jon talks about fine Canadian cuisine, almost spoils a future classic Howard story and may or may not be on Vicodin.…

We are back again with another fantastic live episode of Professor Blastoff, coming to you from the beautiful Largo Theatre in Los Angeles! Kyle and Tig do their best Sklar impressions, talk about their on-tour banging and sing some very memorable duets.…

It's Christmas! And speaking of immaculate conceptions, guest Jon Dore was on the calming shores for the birth of Henderson. Now he's back, and joining the gang on County to laugh through takes on box fans and lap dances for the needy.…

The Origin of Henderson!

This episode of Sklarbro Country is hotter than a 12 acre golf-course fire! Comedian Jon Dore slips seamlessly into conversation with Randy and Jason and golf legend Tiger Woods "opens up" about the love he has for his wife Elin. The guys…