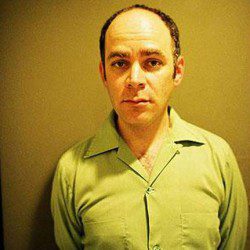 Todd Barry is like a fine wine: Very dry, and makes you giggle like a fool. While you probably only know him as the deli owner from The Wrestler, you might be surprised to know that he is one of the most revered comic actors working, appearing in shows such as Flight of the Conchords, Louie, and Delocated. He has three stand-up albums: Medium Energy, Falling Off the Bone, and From Heaven.

Comedian Todd Barry makes a long awaited return to Who Charted, with fellow comic Max Beasley in tow! Todd gets to know Billie Eilish and throws down with the Grammy Committee as they count down Billboards Top 200 Albums. Then, they dive…

Live from Clusterfest, R.E.M. founding member Peter Buck joins Adam Scott Aukerman to discuss all things R.E.M. Peter talks about the Baseball Project, where he keeps his awards, showing up to the Grammys in his pajamas twice, and offers the Scotts a…

Around the Sun with Todd Barry

Stand-up comedian and actor Todd Barry joins Adam Scott Aukerman as they roll up their sleeves to discuss R.E.M.’s thirteenth studio album, Around the Sun. Todd talks about sitting in with bands like Yo La Tengo as a drummer, when he first…

Comedians Todd Barry (Spicy Honey) and Andrew Heaton (Reason) join Negin to chat about the impact of the Stormy Daniels 60 Minutes interview. Plus, they discuss Trump’s plan to add a citizenship question to the 2020 census. Lastly, Negin asks the panel:…

Opting in with Todd Barry.

I don't know about you guys, but I've still got some bro in my system and I gotta get it out! Enter Todd Barry, Nick Thune, and Matthew Sweet who join Scott for an hour of songs, games, stories, Hot Topics, and…

Let us cherish our last few moments of summah before the drab and dreary non-summah seasons take over. Let us spend the twilight of the finest season enjoying charts and the delightful Todd Barry. Let us learn what is on the Billboard…

Happy Thanksgiving to all you Earwolves out there! I don't know about you, but there are a LOT of things that we at Earwolf are thankful for. We're thankful that top-rated comedian Todd Barry can come do the show and talk to…

When Scott goes to New York to do a show, he gets the absolute best New York comedians out there. Scott and guest-host Todd Barry do some improvisation before they bring out their first guest, comedy nerd demi-god David Cross. Once he's…

When Comedy Bang Bang: The Podcast goes in front of a live audience, you never know what to expect! Like an audience not really understanding just what it is that Todd Barry is doing. Or that Ice T might look nothing like…