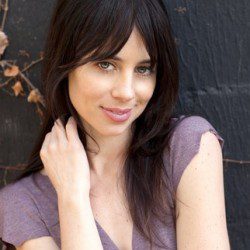 Natasha Leggero traffics in elegance and excels in opulence. Faced with the sad necessity to participate in the workforce, Natasha made lemonade and a fabulous career in stand-up comedy and acting. She was appropriately selected for Comedy Central’s Hot List, and recently starred in her very own Comedy Central Presents. Her album Coke Money is available from Amazon and iTunes, but if any of you gentlemen would like to present her with a dowry she will give up this silly job in an instant.

To keep you entertained at home, we're rereleasing some classic Earwolf and Premium episodes from behind the paywall! You can find the rest of this series on Stitcher Premium. Sanity tips. Structure tricks. Four quadrants, three wins a day. Navigating casual long…

Comedians Moshe Kasher and Natasha Leggero join Scott to talk about RSVPing to parties and not attending, their new podcast The Endless Honeymoon Podcast, and the issue of being on your phone too much. Then, Fred Head stops by to talk about…

Friend of the show Natasha Leggero joins Howard, Stard, and Hugo as we cruise through peak summah! They count down Billboard’s Top 200 Albums while discussing Billie Eilish’s warbling styles and why East Coast rap reigns supreme. Plus, they cover the Paul-Ringo…

Howard is re-joined by Natasha Leggero this week to share their biggest, Brody-est memories and to reflect on the speakers and stories from Brody’s memorial at The Comedy Store. This episode is sponsored by Robinhood (www.CHARTED.robinhood.com), Joybird (www.joybird.com/CHARTED code: CHARTED), and Squarespace (www.squarespace.com/CHARTED code:…

Natasha Leggero joins Michael for a special live reading of Jude at Sketchfest in San Francisco.

Actor, improviser, and writer Matt Walsh (Veep) joins Howard, Natty Legs and the Whooch Crew as they brace themselves against the polar vortex! They’ll count down Spotify’s Top 50 Viral Songs while questioning the value of bottle service and getting into the…

Actor and comedian Bobby Lee joins Howard, Natasha and Stard this week for another Who Charted?! Bobby talks about how his girlfriend changed his life and career and his new film Public Disturbance before they count down the Top 5 Songs on…

On A Shuckers Schedule

Writer, comedian and podcaster Hayes Davenport (Hollywood Handbook) joins Howard and the gang to recall his fondest summah memories! They’ll count down the Billboard Hot 100 Top 5 Songs while Hayes vents on the scarcity of a beloved summer treat. Then, we’ll…

Comedian, actor and writer Fahim Anwar (Whiskey Tango Foxtrot) joins the Whooch crew this week to count down the latest charts! Fahim talks about his new comedy special “There’s No Business Like Show Business” while they count down the Top 5 Rock…

Go Out There and Get Rained On!

Comedian Jen Kirkman joins Howard and Natasha for this week’s Who Charted! Jen shares stories of her own personal summah and we get a millennial’s perspective on music streaming while they count down the Top 5 Songs on iTunes. Plus, we’ll hear…

Welcome to Checkpoint Summah! Comedian Brent Weinbach joins Howard, Natasha and Stard to count down the latest charts. We’ll hear about Brent’s time entertaining the troops, family ancestries, and the artistic merit of video game soundtracks while they count down the Top…

Actor, writer, and Howard’s creative partner Chip Pope joins in on this week’s Who Charted! Chip talks living on less and the perks of having a hacker while helping count down the Top 5 Songs on iTunes. Plus, we hear the most…

Comedian Brendon Walsh joins Howard and Natasha for this week’s Who Charted! They assess the latest hijinks of Kanye West while counting down the Top 5 Songs on TIDAL. Then, we hear the Movie Chart and Brendon talks about his podcast “Do…

Going To See The Chains

Comedian Chris Garcia joins Howard, Natasha and the crew to ramp up for summah on this week’s Who Charted! Chris discusses his debut album, “Laughing and Crying at the Same Time” before they get into the Top 5 Songs on iTunes. Later,…

Comedian and cartoonist Mo Welch joins the crew to count down the latest charts in pop culture! Mo talks about her cartoon Blair and Howard shares overheard Stagecoach stage banter while they count down Billboard’s Top 5 Pop Songs. Then, we’ll hear the Movie…

This Is Not Creamy

Comedian Moshe Kasher joins Howard and Natasha this week to talk about his and Natasha’s new stand up show on Netflix “The Honeymoon Stand Up Special.” We’ll hear about the state of pop rock and how Moshe taught Justin Bieber a lesson…

Actor and comedian Jon Daly joins Howard and Natasha this week for all the latest charts in pop culture! Jon talks about his Twitter feud with rapper Lil Xan while they count down Billboard 100’s Top 5. Plus, they touch on the…

A Face For Hats

Comedian, writer, and actor Guy Branum joins H. Michael Kre and Natty Legs to offer up Coachella predictions on this week’s Who Charted! Guy talks about his new book My Life as a Goddess: A Memoir through (Un)Popular Culture while they count down the…

A Mall and a Paul

Comedian Chris Fairbanks (Do You Need A Ride podcast) joins Howard and Natasha for this week’s Who Charted! We’ll hear about a fanatical group of gun-and-sand enthusiasts and the benefits of spa days while they count down Billboard’s Top 5 Country Songs.…

Comedian Brandon Wardell joins Howard, Natasha and the gang to count down the latest charts in pop culture! We’ll find out which rapper stole a bit from Brandon’s Twitter while they count down the Top 5 from the Billboard 100. Plus, they…

Comedian and actor Steve Agee joins Howard and guest co-host Natasha Leggero for this week’s Who Charted! We’ll hear about Matthew McConaughey’s bumper stickers while they ponder the next musical revolution during the Music Chart, and Natasha celebrates her newfound religion while…

Friend of the show Natasha Leggero returns to Who Charted to help count down the latest in chart culture! Howard and Natasha count down the Billboard Hot 100 while covering Tim McGraw’s dehydration act and Tommy Lee’s familial fisticuffs. Plus, Natasha airs…

This Is The Story of My Life

Natasha Leggero and Riki Lindhome of Another Period join Scott to talk about the third season of one of the best non-sports shows on television. Then, adventurer Kiwi Kris stops by to tell us about his adventures which includes falling into a…

Comedians and showrunners Natasha Leggero and Moshe Kasher join Howard and Kulap this week to discuss how not to be an idiot, and when to appropriate when it's appropriate! The squad counts down iTunes's Top 5 Rap & Hip Hop Songs while…

Join guest host Paget Brewster as she sits down with actress and comedienne Natasha Leggero (Another Period, The Do-Over). Natasha chats about her early days in LA, collaborating with Paget, and her fantasy of the ideal day. This episode is sponsored by…

Another Period creators Natasha Leggero and Riki Lindhome are back along with singer-songwriter Dan Mangan on this week's Comedy Bang! Bang! They join Scott to chat about Dads and Grads season, peeing your pants, and how Natasha & Riki spend their leisure…

Actress Chelsey Crisp joins Howard and guest co-host Natasha Leggero on this week’s Who Charted. They brainstorm what drugs would be needed to enjoy the Billboard’s Hot 100. During the movies chart, they discuss celebrities, Periscope and writing comedy at a fast…

Howard and guest host Natasha Leggero welcome comedian and poker enthusiast Kyle Dunnigan who helps determine what the generation after the Millennials will be called, as well as why Tom Cruise is better at acting like a normal person in movies than…

Kulap welcomes back Howard who tells the tale of his Summah Sojourn, as well as why convenient stores are at times, rather inconvenient. Then, Natasha Leggero joins our hosts to discuss her new show Another Period and why having to go to…

Natasha Leggero and Jeremy Konner of Comedy Central’s Another Period are here to give us all the juicy details about the fake reality show set in 1902, who’s first on the call sheet, and how they got Snoop Dogg to sing the…

We've got Kumail Nanjiani counting charts with your WieWie and Nntasha for another great episode of  Who Charted?! On this week's Who Charted? we'll learn how Kumail votes in the Girls vs. Music debate, why you should skip having kids, and just…

It's Wednesday, which means it's time for the best part of everyone's week, a new episode of WHO CHARTED is here with your host HowHow, and special guest host, and spa professional, Natasha Leggero!  The star of THE Guiding Light and overall…

You’ve seen her in Burning Love, It’s Always Sunny in Philadelphia, and on stage everywhere, but today Natasha Leggero joins the guys in Sklarbro Country. Listen in as they discuss high art, Natasha’s strangest set (hint: Thailand), and her biggest issue with…

Fan favorite Kumail Nanjiani makes his triumphant return to WhoochVille after a whopping 142 episodes and the lovely Natasha Leggero fills in for Iced Boba on this week's extra mega super special WHO CHARTED! Howard nobly hosts the show with a scratchy…

It's been quite a while since we've checked in with our friend Natasha Leggero. We were thrilled to have her back on the show this week to learn about J-Pop sensation Nicki Minaj in the Music Chart, get a sight-unseen review of…

What a cutie we have for you this week! Natasha Leggero is absolutely darling, and despite the fact that she insisted on discussing disgusting issues of sanitation with us, we still love her and would love to have her as a Facebook…

When you pair two superstars like Angelina Jolie and Johnny Depp, what's the worst that can happen? Apparently it's The Tourist. Jason lucked out and missed this movie, but Paul, June, and special guests Natasha Leggero and Gil Ozeri are here to…

Creak! Slam! Sit down for some Comedy Bang Bang: The Podcast! This week's episode has everything you love about the show; the music of Phish and pussy jokes! Natasha Leggero, Harris Wittels, and Harris' protege King Henry VI are our guests, along…

Ku-ku and Wie-wie are back for week three-three here on Who Charted?! Guest Natasha Leggero brings in her patented disdain for the bourgeoisie as the three count down the hottest music, movies, and Christmas toys for the week. We learn why dancers…

When you think about comedy shows like Last Comic Standing, Comedy Is Dead, and Chelsea Lately, you probably also think of comedy power couple,  NATASHA LEGGERO and DUNCAN TRUSSELL. Now that we've had this lovely pair on, we think of them when…

I know, I know, you guys are tired of these drop-in's from Scott's ex-step-father, but for whatever reason Bob Ducca won't stay away. But please don't ignore the episode just because of that! Jason Mantzoukas talks about working with Scott on the…

This episode is all about fame! Famous twitterer Steve Agee talks a bit about his trending topic #2DoucheConvo, Natasha Leggero does the best “ladies comedy” you could ever hear, and Matt Besser tries to figure out just what it would take to…